Reviewed By: Manuel Crosby Final Score: Some prioritize a low learning curve, others look for keyboard shortcuts instead of mouse-driven interfaces, and still others simply seek out budget-friendly options. I will discuss one option from EditShare: Lightworks v14 Pro. 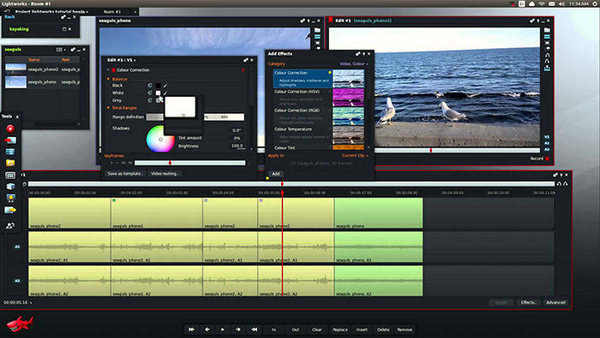 Reviewed By: Manuel Crosby Final Score: Some prioritize a low learning curve, others look for keyboard shortcuts instead of mouse-driven interfaces, and still others simply seek out budget-friendly options. I will discuss one option from EditShare: Lightworks v14 Pro. As the latest update to the Lightworks line, how does it stack up to other popular editing options? And which types of editing needs can it fulfill?

Users can use the mouse to select and use most tools needed to cut on the timeline. Of course, these programs also have keyboard-based commands—which, once memorized, allow for faster editing. However, I find the incorporation of the mouse makes the programs easier to learn on. While Lightworks follows this trend somewhat, its click-commands are less intuitive. For example, users can reposition a clip on the timeline by clicking and dragging.

However, when one attempts to trim the head or tail of a clip by simply clicking the edge of the clip and dragging in towards the center, it actually lengthens the clip in the opposite direction. Additionally, unlike other programs, there is no way to manually select what the cursor does. You cannot turn it into a razor, slip edit tool, or trim tool using any commands.

Instead, you have to already know where to click on the clip to get it to react in the way you want. This results in a much higher learning curve than the competing softwares. With that said, on the plus side, once commands are memorized, fewer steps are necessary to achieve results. One control that proves useful is the right-click function, which brings up unique menus in each window. Everything from importing clips, adding LUTs, and exporting can be done through a simple right-click. However, if the cursor is near the bottom of your editing window, the popup menu will be cut off by the edge of the screen, instead of auto-positioning to stay in the viewable window.

I highly recommend that interested users download the user manual from the website when you download the demo to try itout. Without it, learning the key commands will prove extremely difficult because the keyboard menu cannot be accessed from within the editing project.

It can only be opened from the project selection window upon startup. Depth of Options Once you learn your way around, Lightworks includes a wide array of options for picture editing, video effects, color, and audio work. However, the audio options lack depth—even though they include some nice features.

More on that later. Lightworks, the new program by EditShare, offers many options for editors. One very helpful tool is the ability to export unedited clips from your bins in a variety of formats.

This is a great way to create proxy files when editing more system-intensive content, like Cinema DNG Digital Negative files. Furthermore, unlinking the proxies and returning to the master files after editing will require file structure rearrangement within your hard drive, because Lightworks does not include an option to unlink or relink media. Here you can see that color correction tools are included alongside the timeline editing controls.

There are many useful presets and customizable parameters. Furthermore, one can use a 3D LUT that they have stored in any location on their computer to adjust their grade. Finally, a wide range of default title layouts will save time when adding text. Maybe there are ways to do a lot of the above with the controls that Lightworks offers.

However, as a new user, I cannot locate those options or figure them out, so I think that is something they could improve on. Adding these options to their Audio FX panel would streamline everything. But on this note, there are some helpful EQ presets within the software. I wish the program designers had invested as much though in really fleshing out the audio editing parameters beyond EQ. Users of stock footage and music will be pleased to discover that Lightworks includes the ability to search and purchase content from both Pond5 and AudioNetwork, all without leaving the program.

This feature will save a few steps for many editors. Performance The software seems to perform reasonably well during basic editing, but begins showing weaknesses when more tracks or complex effects are added. In addition to confirming that my system met the requirements listed in the Lightworks documentation, I used the included GPU Test tool accessible on the home menu screen and passed.

When cutting H. However, once I pushed the software by adding 7 more video tracks, it slowed down.. As expected, they did not play back smoothly- few programs I have encountered using my hardware have this ability. As mentioned earlier, one semi-helpful workaround was to create proxies from any clip during editing using a built-in Lightworks function.

This did allow me to work with the Cinema DNG files a little easier. However, playback issues still occurred after proxy creation. The video would start to lag after 2 or 3 clips had played, even though the proxy render had finished. Rendering occurs at a decent speed and runs in the background, allowing users to keep editing. I greatly appreciated the ability to do background exporting without leaving the Lightworks program, and it added a lot to the final performance score.

While the audio editing panel lacks depth of options, it does include helpful EQ presets. Value Users have several payment options for Lightworks Pro. This adds to the value in my opinion because it prevents users from being trapped in a subscription loop.

Unfortunately, for me, the absence of powerful audio tools is the one large oversight that drives the value down. For those who simply want to get started with this software with more basic editing, a Basic version of Lightworks can be used for free. Many export options and other capabilities are severely limited, but this can be a great way to try the software before committing. Final Comments Lightworks is a curious program.

For those willing to study the user manual, it includes many useful features and even improves in a few areas that editing softwares often lack. However, its uniquely high learning curve and the fact that it neglects other features that users commonly expect in professional editing suites detracts from these positives. My best recommendation would be for editors to try it out for themselves for a month, and decide if the different layout and user experience works for them.

Lightworks bit is EditShare’s Academy and Emmy award-winning, professional Non-Linear Editing (NLE) software supporting resolutions up. Professional-level video editing is now yours for free – but despite the plethora of features and user-friendly interface, it’s definitely not a tool for. For over 25 years Lightworks editor has been at the forefront of film editing, having been used on many of the finest films in cinema history: The.

Found a bad link? Help us by reporting it We believe that to make great work, you need great tools. And editing is no exception.

Compression and decompression of information in the intervening time very lot quicker as compared to in advance incarnations. And improved preview tools enable you to probably now not simply acquaint yourself with the gadgets in the Zip archive but also to observe and modify statistics in other favorite kinds this as 7z and RAR.

Plus, users may have the capability to regulate records in several models to Zip format.

Lightworks Pro Crack is a great and video editor that is high-speed. As a result, the speed of this software hugely well more than any other. Lightworks for Linux bit. Latest release: Release date: 17 Oct Release notes: View. Recommended spec: View · Download icon Download DEB. Lightworks video editor is among the few academy award winning editing systems that have created Hollywood master pieces such as Moulin Rouge Mission.